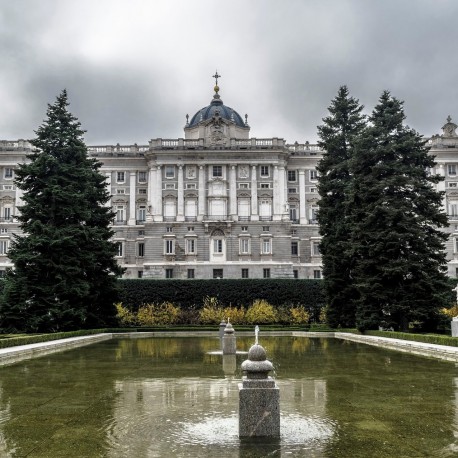 The building that now houses Prado National Museum was designed by architect Juan de Villanueva in 1785, by order of Charles III.

We will start our tour in the information point of the Madrid city tour, in Felipe IV street next to the Goya entrance.

The building that now houses the Prado National Museum was designed by architect Juan de Villanueva in 1785, by order of Charles III. It was intended as a Cabinet of Natural Sciences. The Prado National Museum opened to the public in 1819. The first catalogue included 311 paintings, although by that time the museum holdings already totalled 1510 works from the Royal Sites. The extremely valuable Royal Collections, seed of the Prado Museum’s current collection, began to take shape in the 16th century under the auspices of Emperor Charles V. They were then augmented by every subsequent monarch, both Hapsburg and Bourbon. These rulers were responsible for collecting some of the most iconic treasures on view in the Prado today, including The Garden of Earthly Delights by Bosch, The Nobleman with his Hand on his Chest by El Greco, Las Meninas by Velázquez and The Family of Charles IV by Goya. The tour will proceed in chronological order, beginning with the gallery exhibiting the masterpieces of Hieronymus Bosch (1450–1516): The Seven Deadly Sins and the Four Last Things, Haywain Triptych, The Temptation of St Anthony, The Cure of Folly (Extraction of the Stone of Madness) and The Garden of Earthly Delights. We continue on to the galleries dedicated to El Greco (1540–1614): The Nobleman with his Hand on his Chest, The Trinity, Christ Carrying the Cross and The Annunciation. Velázquez (1599–1660): The Adoration of the Magi, The Drinkers, equestrian portraits, Vulcan’s Forge, Christ on the Cross, The Tapestry Weavers, The Surrender of Breda or The Lances and Las Meninas. We finish with Goya (1746–1828): The Family of Charles IV, portraits, The 3rd of May 1808 in Madrid or The Executions, the Majas and the Black Paintings.

Once the tour is finished, the visitor can stay in the museum as long as it wants.

Remember that the museum does not allow to take photos inside.