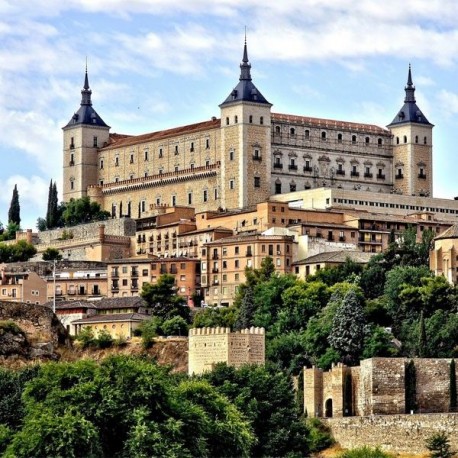 Toledo On Your Own Half day

Discover the “City of the Three Cultures” in just one afternoon! Ideal if you're in tight schedule. Departs at 3pm.

Please pick a date to begin configuring your tour.

Tour departs at this time, please show up 15 minutes earlier.

Toledo On Your Own

Discover the “City of the Three Cultures” by yourself!

Located 70 km away from Madrid is Toledo, a beautiful city-museum declared World Heritage Site by the UNESCO. It is one of the oldest towns in Europe and has a great artistic beauty and features buildings from almost all periods in the history of architecture (Arabian, Gothic, Mudejar, Renaissance and Baroque style). Toledo is called the “City of the Three Cultures”, since Christians, Muslims and Jews lived together. In the XVI century, it was also the place of residence of the great painter Doménikos Theotokópoulos, El Greco (The Greek).

Once in Toledo, you will arrange your day in Toledo as you like. 1 hour guided walking tour in Toledo is included.

We'll meet again at 6:00 pm, in front of the Hacienda del Cardenal restaurant (Pº de Recaredo 24), close to Puerta de Bisagra. We will make a panoramic bus tour and stop at the Mirador del Valle for taking pictures before heading back to Madrid.